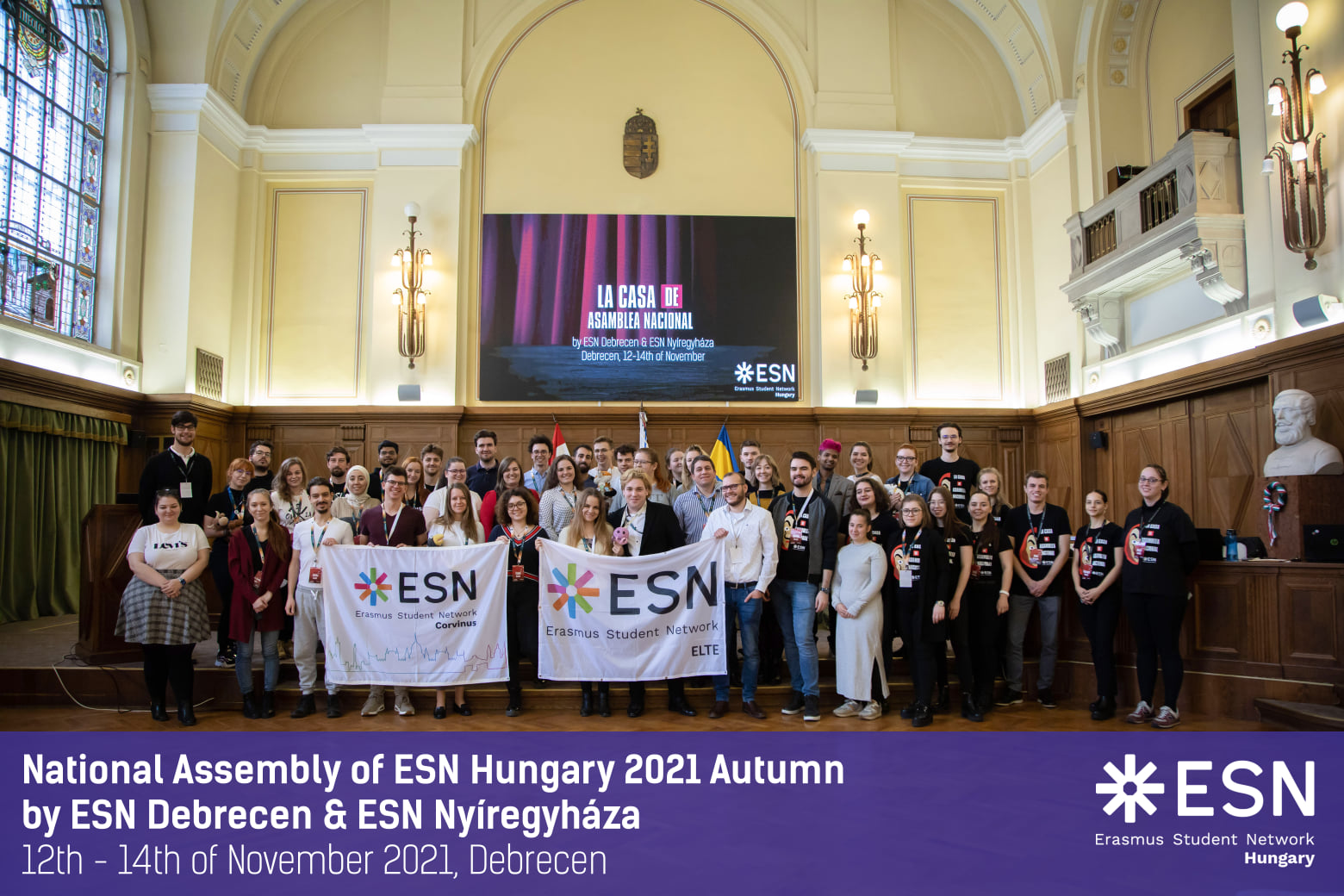 This was ESN Hungary’s very first physical NA since the beginning of 2020 and the pandemic. It took place in the beautiful city of Debrecen and its famous university of the same name. For a lot of new members who haven’t been at an NA before, this weekend was their first introduction into the National and International world of ESN. Overall, we had around 44 participants with 2 International Guests from ESN Slovakia.  The theme of the event was La Casa de Papel (Money Heist) and the OC, ESN Debrecen really outdid themselves with the visual representation of the TV Show on shirts, logos and room designs for the entirety of the event. Other than reports and updates there were discussions on the GA documents, three SSO proposals made by the NB and several small sessions. Overall, this was an amazing weekend that was much needed for the network and for the NB as well.

On Friday the participants started arriving to Hotel Nagyerdő in Debrecen and were greeted by the OC. For participants who weren’t at a Physical NA before (which was most of them because of the pandemic) the National Representative held a presentation called NA (National Assembly) for newbies. This gave a very basic structure of what ESN is about on the national and international level. After that there was a lovely Dinner which was followed by the reflection group meetings. To end the day and prepare for the weekend we had a lovely game-board night and other teambuilding games.

The day started off with some update presentations from the National Board at the University of Debrecen’s Main Lecture room (same one as in CEP Debrecen 2019) which was not only hopefully interesting to the participants but to the NB (National Board) as well since the last update happened at the beginning of the NBs mandate and online on May 1st. After the updates there were some reports on national and international events. Namely we talked about our National Training Event that happened during the summer called Skills Academy. We also had reports on, CEP 2021, ErasmusJobs Training, SIYE and our National Skills and Employability event called Changemakers Youth Forum. During the CFY event seven organizations joined forces to promote youth leadership among several other topics. After the reports there was a Treasurer and Partnership community presentation where ESN Hungary’s partners were showcased and how to help sections get more partners were highlighted. And of course, we discussed our national SSO changes.  After the discussion the presentations for Saturday were finished and we moved on with another session called NB Stations where each NB member had a chance to discuss with the local members as to what the job is for each NB positions is. Not only was this useful for the several new ESN members we had but because our next NA will be an Elective NA for the new NB. We officially ended Saturday’s presentations with the reflection groups session. For the Social Programme the OC gave us the chance to go to a nearby Thermal Bath to relax after a hard day’s work and then for the night they prepared a La Casa De Papel themed karaoke night for the participants, where everyone had a chance to sing their heart out with some “Bella Ciao” in the mix.

On Sunday we started off with some energizers, then moved on to the Status & Needs Assessment presentation and how we can collect the information we need to help the sections. We had a presentation afterwards about our National Gala and how our ESN awards will look like this year. Namely we will have a small Christmas Gala and an Official Spring Gala during March. We split our International Project award into 4 categories: best Health & well-being event, best Green event, best Social Inclusion event, best Cultural event. Moving on to some international news, since the registration for EGM Portugal 2022 opened we discussed how that might look like in the upcoming months. We had Visual Identity Usage refreshers also for our section and then a presentation from Yes-Trips on how we can cooperate in the future. We also made sure to talk about the New Erasmus+ App and how our cooperation looks like currently with our Buddy country ESN Croatia. With the Status & Needs Assessment segment we also implemented a Section Visit presentation about how the NB is planning to visit every section during our mandate and offer our help. To end the NA, we had a final presentation from ESN ELTE and ESN Óbuda University about how the next NA will look like. We officially closed our first Physical live NA since the pandemic and said tearful goodbyes to each other but went away insanely motivated and excitedly waiting for our next National Meeting.